This is the first time I’ve been to Rumpus Room when the sun is still shining. It’s daylight savings in Melbourne, and there’s lots of light and nowhere to hide. This is probably a good thing for Bryan Spier‘s show, Actual Painting, (Saturday, 25th Oct. 6pm-8pm) “an improvised wall painting and installation composed from scraps, offcuts and various objects found onsite at Rumpus Room.” It’s a site-specific painting, if you will. But it’s also a collage and an installation.

When I open the garage door, I experience a real jolt of pleasure as I step into a whole other magical space of colour and angles and lines. The colours sing. And the tune is lighthearted almost euphoric.  I stand and enjoy. That’s when I notice the complex play with space. The forms, which at first appear to me as abstract, on closer viewing I realise are full of hints and touches of the non-abstract, even figurative. 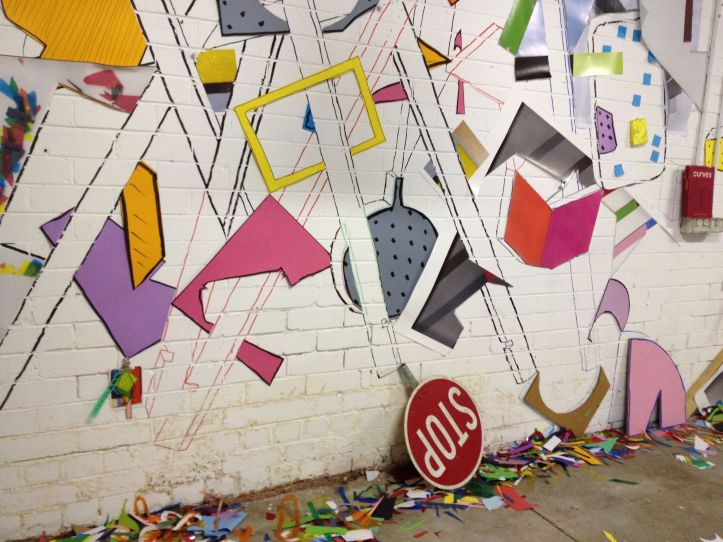 The picture plane itself is not flat, with drawings of plank-like objects criss-crossing each other, creating a complex sense of depth. And later Bryan explains that these line drawings are actually tracings of wooden pieces he found in the backyard of Rumpus Room, or nearby. And there’s lots of other suggestions of the figurative and the ‘real’ with suggestive drawings, things, found objects, collaged images from prints as well as the detritus of making, left where they landed at the base of the wall – giving a real sense of the actual performance of this painting. ( there’s that word ‘actual’ again)

Abstract painting is said to have three separate but simultaneous champions: Kandinsky, Piet Mondrian and Malevich. Spiers manages to reference all three at the same time, in the same work. The clear and flat primary colours recall Mondrian’s neo-plasticism; the constant sense of movement across the composition summons up the spiritual and painterly dimensions of Kandinsky; and as for the third of this triumvirate of pioneers, Malevich, he is cleverly referenced through a canvas bag hanging in front of one wall with the words MALEVICH printed on it in black. The very humble and material form of the canvas bag, hanging almost forlornly from the ceiling, seems to both pay homage to this Suprematist innovator and to quietly disagree.

Under Suprematism I understand the primacy of pure feeling in creative art. To the Suprematist, the visual phenomena of the objective world are, in themselves, meaningless; the significant thing is feeling, as such, quite apart from the environment in which it is called forth. (Malevich)

It is almost one hundred years, since Malevich wrote his Suprematist manifesto and hung  Black Square (1915), the work that would be so influential to following generations throughout the 20th century, in the top corner of the room, in the 0.10 Exhibition. A lot has happened since. If ‘pure feeling’ and the denial of the visual, objective world was the advanced ideas for 1915, in 2014,  it is the very materiality of our world and it’s connections, it’s flows and spaces that are of interest to today’s artists and theorists. Although like Malevich we too have turned away from the optical, the purely visual to embrace all of our senses, including the  troubled relations between the virtual and the material. Given the current interest in materialism driven by the several theories circulating under different names like post-humanism, post-materialism and Object Oriented Ontology (OOO), I can’t help experiencing Spiers abstract/figurative material and performative painting as part of that conversation.

But if the initial impression of a painter deeply engaged with abstraction and its ongoing relevance is one resonance, on closer inspection this too opens out to a broader engagement across  20th century modernism with its many twists and turns. The title “Actual Painting” suggests a clever pun on the very material, and actual found objects that make up the painting – the offcuts lying on the floor, the bits of things incorporated into the composition, a stool, a stop sign, even a broom. I’m suddenly aware of Duchamp and the snow shovel, ‘in advance of a broken arm’. Perhaps the broom is ‘in advance of a sore arm, soon’. The play with the words “actual” and “action” encapsulates in one near-slippage the difference, the time differential between the performance of historical “action” painting and the performance of Spier’s “actual” painting. The latter’s concern with the material objects of the world, right now in the present, in this case in the artist’s present – push against the play with the virtual, the space of the painting which is always more, an excess.  With all these rich associations, drawing upon a broad and generous vocabulary of modernist painting, Spier seems to remind us that we live in a world that is both material and virtual – and in this composition, as in our ‘actual’ everyday mediated experience, these two disparate worlds are held in tension, together.