Last Saturday night Kings ARI and Dudspace opened with big happy crowds of people flocking to the space. Peter Hill’s The Art Fair Murders filled all the spaces at Kings with murder and mayhem. Everyone loves a good murder mystery, and to choose the art fairs as a location for such murders seems perfectly plausible. “Twelve bizarre murders in twelve cities around the world.” This is an ongoing project for Hill and brings together the four strands of his practice: installation art, independent curating, novel writing and art writing.

For the curating strand of the installation he included works by many of his students – including a performance piece by two artists dressed in shades of fluorescent pink. Their project titled “Love is in the Fair’ was a sort of performative intervention into the installation, making the opening night itself a performance by all of us. The two performers very gently, and persuasively, asked art-goers the questions “Are you dying to date an art dealer” Would you kill to cuddle a curator?” Their project sought to hook you up with a “5 minute date” from a perfectly matched other from the crowd of art gallery goers . I was matched with a smiling older man from out of town – very nice, but unfortunately neither an art dealer nor a curator. No matter, it was a fun date and the project highlighted the unspoken requirement of what it takes to make it in the art world. Connections.

There seemed to be performance in the Fair/air. In the middle of my date a piercing scream rent the air and the noisy crowd fell silent. I rushed into the adjoining room to witness the Age art critic, Robert Nelson slashing a minimalist green canvas with evil relish.

DUDSPACE: The project at Dudspace was an incisive and perceptive exploration of artistic collaboration through the counter-intuitive idea of inviting 3 artistic duos to make work singly and in secret, without the other knowing what they were up to. Titled “Simpatico with practice” it presented the work of 6 artists, Aiden Madden, Ellen Fairbairn, Nella Themelios, Ricard Bigolin, Annabelle Kingston and Alan Kingston, who were asked “to make a quintessential work”, completely independently from their partner. 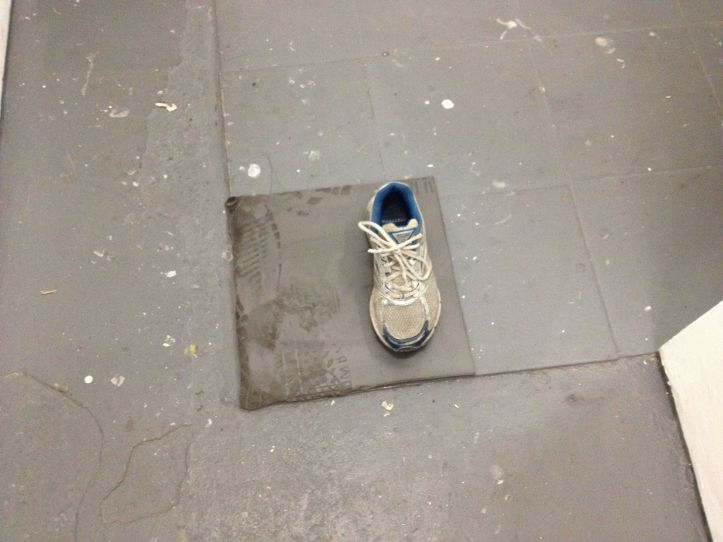 This witty provocation proved productive. The artists, working solo and independently, produced very different work from each other. It showed how differently the two artists approached a work.  And yet together each artist’s ideas would theoretically come together and eventually produce something else, a third outcome. Which reminded me of Charles Green’s ideas about collaboration in the 1960s and 1970s and what he called The Third Hand. As I angled my way into the tiny space I could hear noisy peals of laughter and recognition as each of the separate artists revealed their work to their other half. It made me wonder what sort of piece would they have made together, given the same brief?